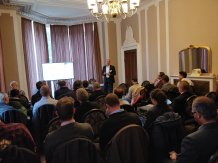 A dissemination workshop on the RAMB project was organised successfully by the Centre for Water Systems on 31st October 2018.

The EPSRC-funded project is aimed at enhancing the resilience of our transport infrastructure by enabling practitioners to assess the risks to bridges from debris accumulation in the watercourse, a leading cause of bridge failure or damage during floods both in the UK and world-wide.

The project, which involves both experimental work in the flume and numerical modelling via CFD, is supported extensively by major industry players in the area such as Network Rail, Devon County Council, ADEPT, JBA Consulting and Mott MacDonald.

Findings from the research have led to a novel risk-based approach for evaluating the scour due to debris at bridge piers and abutments. The approach is currently in the process of being embedded within guidance used by bridge engineers and operators.

The dissemination workshop was held at Reed Hall on the University's Streatham campus and presented the outcomes from this research including the novel approach and its application to a few full-scale bridges. It was attended by a good number of industry practitioners including local authorities, consultants and stakeholder groups and also by a few members from academia. Further information on the project is available via the project blog.