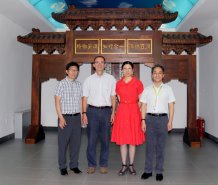 Professors Fu and Savic in China

In July 2017 a team of academics from CWS travelled around China to build relationships with similar research groups in the country.

The main event was the UK-China Joint Workshop on Urban Flooding and Sponge Cities, held in Shenzhen. Sponge City is a term derived from a comment from the Chinese President. It means a city that is designed to passively absorb, clean and use rainfall in an ecologically friendly way, often to help with flood prevention.

The workshop was aimed at early career researchers from the two countries to enable networking and sharing of research findings in sustainable urban water management. It was funded by the British Council and the National Natural Science Foundation of China (NSFC). The workshop was organised by team from CWS led by Professors Savić and Fu,  alongside a Chinese group led by Professor Yuntao Guan, Professor Haifeng Jia (Tsinghua University) and Professor Huapeng Qin (Peking University).

It was an essential platform for delegates to discuss critical issues, share the latest research, and demonstrate Sponge City developments. Over 40 participants from the UK, China, Canada, Japan, South Korea and Sri Lanka presented a wide range of methodologies and applications. These included flood simulation and risk assessment tools, new metrics, and frameworks that can be used for design, planning and assessment of Sponge Cities. There were keynote talks from experts such as Professor Paul Leinster CBE, Professor Nigel Wright and Professor Mooyoung Han.

Following the UK-China workshop, the Exeter team and Shenzhen Water Group held a one-day workshop to discuss how new technologies and tools developed at CWS can help improve water infrastructure management. Dr Yufeng Guo from Veolia China, who actually studied for his PhD at the CWS, attended the workshop, sharing thoughtful insights in to urban water management in Chinese cities.

After the trip Professor Fu said “China is a country with the most challenging problems in water engineering and science. This visit is part of a wider theme of knowledge exchange, which is one of the reasons CWS is at the forefront of developments in the field. Trips like this are ultimately beneficial for both the UK and China”